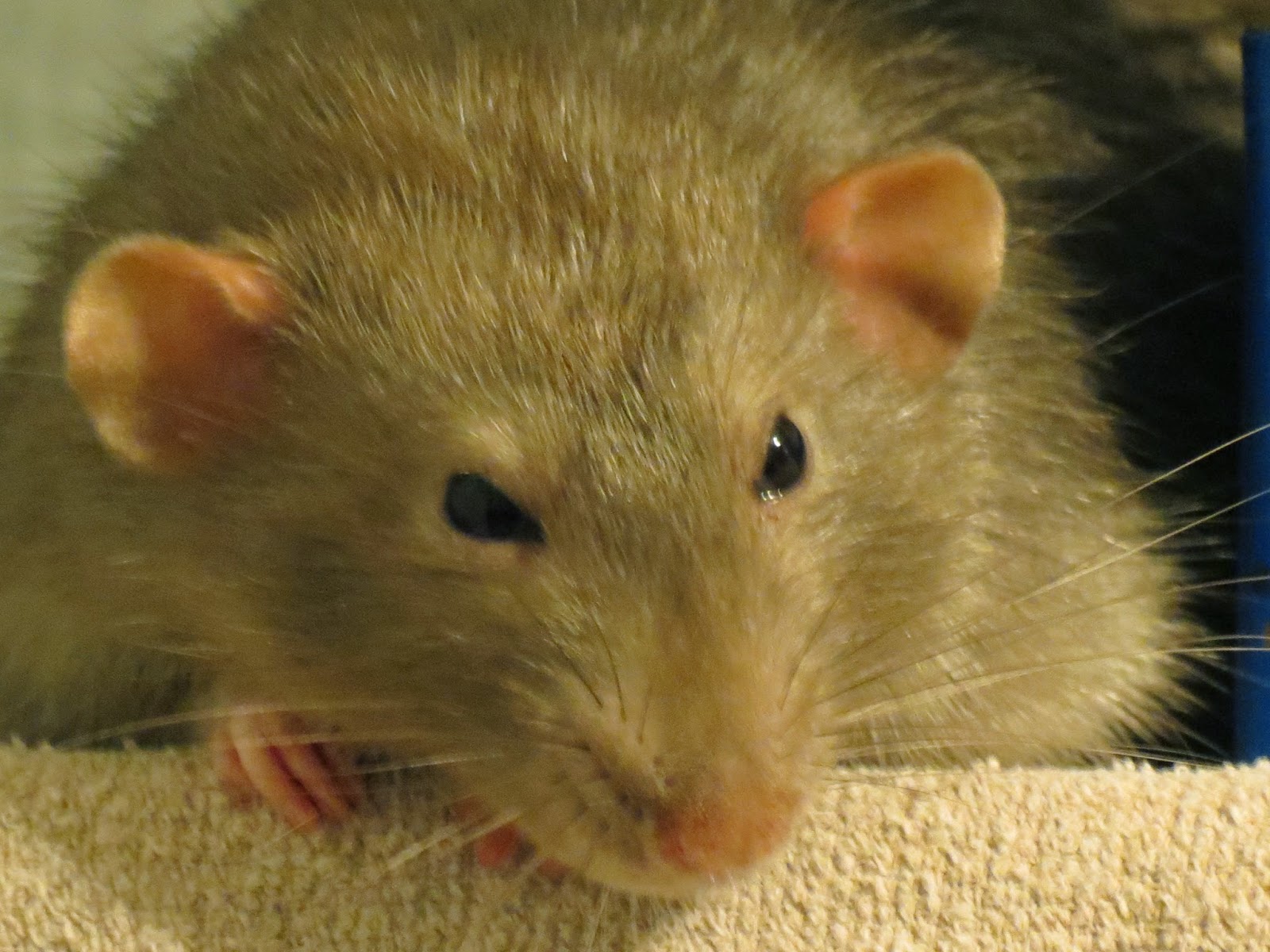 Rats are not pest. Nether are they filthy, "ew", evil, dumb nor disease-ridden.
As a matter of fact, they are quite the opposite.
They are very clean and spend a great deal of time grooming themselves.
They are gentle and will care for sick pack members, even bringing them food and water.
They can be taught by humans to do tricks, including "rat agility."
They are no more likely to get sick then any other animal and I have never known anyone who got ill from a rat.
Yet they are greatly hated and feared. 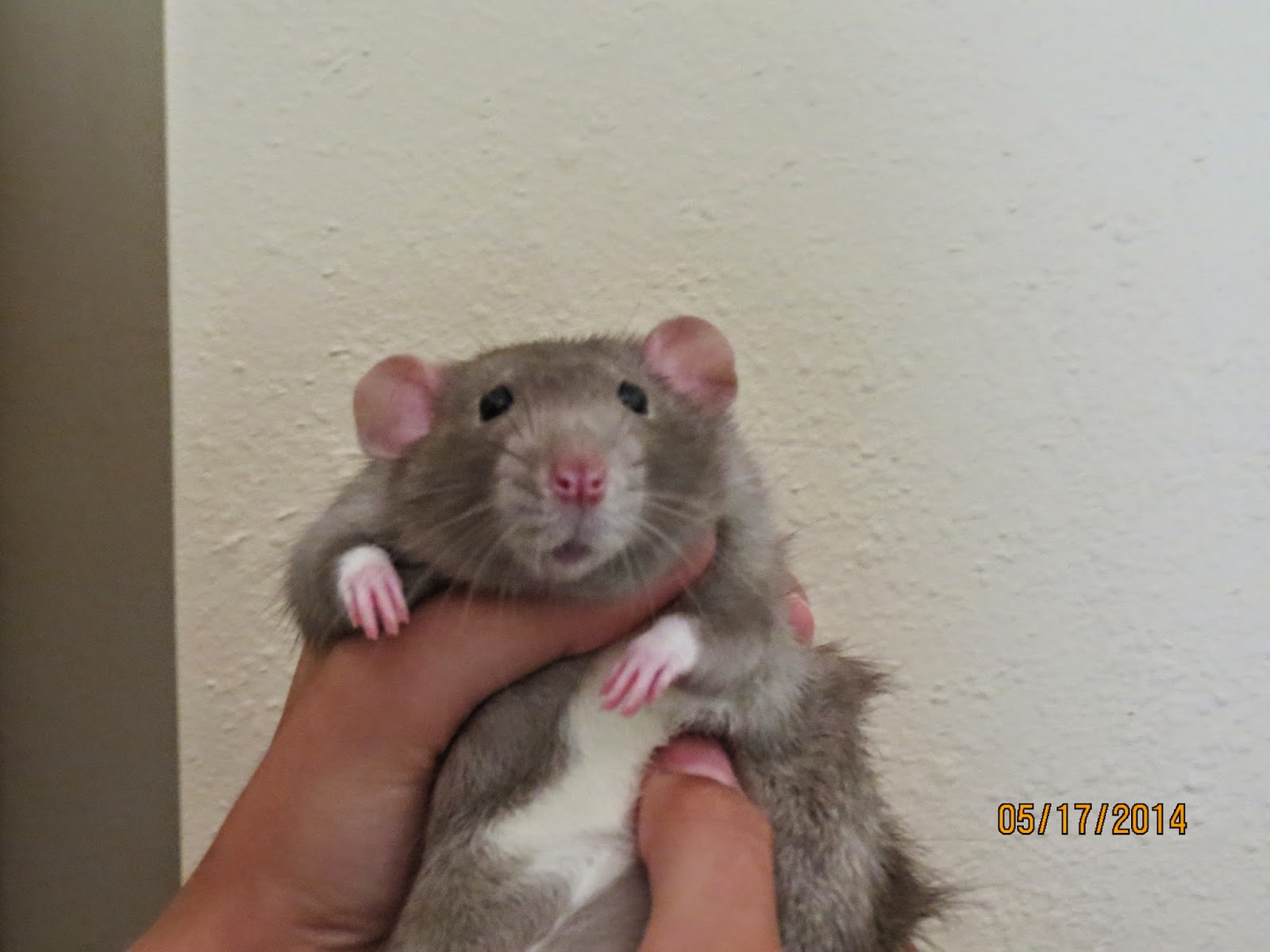 For no greater crime then trying to find a safe place to stay, they are murdered by thousands.
They are caught in glue traps, where they suffer for days. Sometimes they will even chew their own legs off in an effort to escape.
They are caught with spring traps, often dying from being strangled and not instantly, as some would have you to believe.
They are poisoned, causing them to slowly bleed to death inside. Any animal who eats them afterword, like hawks, owls, foxes, opossums, cats or dogs, also die a similar death.


They, along with dogs, monkeys, apes, cats, rabbits, and many other creatures, are tortured in laboratories, for no better reason then to feed the greed of monsters in human form.
They are cut open while still alive and fully conscious. Their backs are broken. They have poison poured down their throats. They are electrocuted and burned. They are given cancer and other terrible disease.
There are no laws whatsoever to protect these rats here in America.
What little they can learn from rats to actually help humans, they can learn and - probably have - with non-living experiments.
It is the 21st century!
If anyone agrees with animal testing, I suggest you read Animal Liberation by Peter Singer.
If you are still agree, I strongly urge you to go and have your head examined because you are an idiot.
Nothing they learn can ever justify what they have done and continue to do to the most innocent among us.
That being said, here is the story of my little rat, Remy. 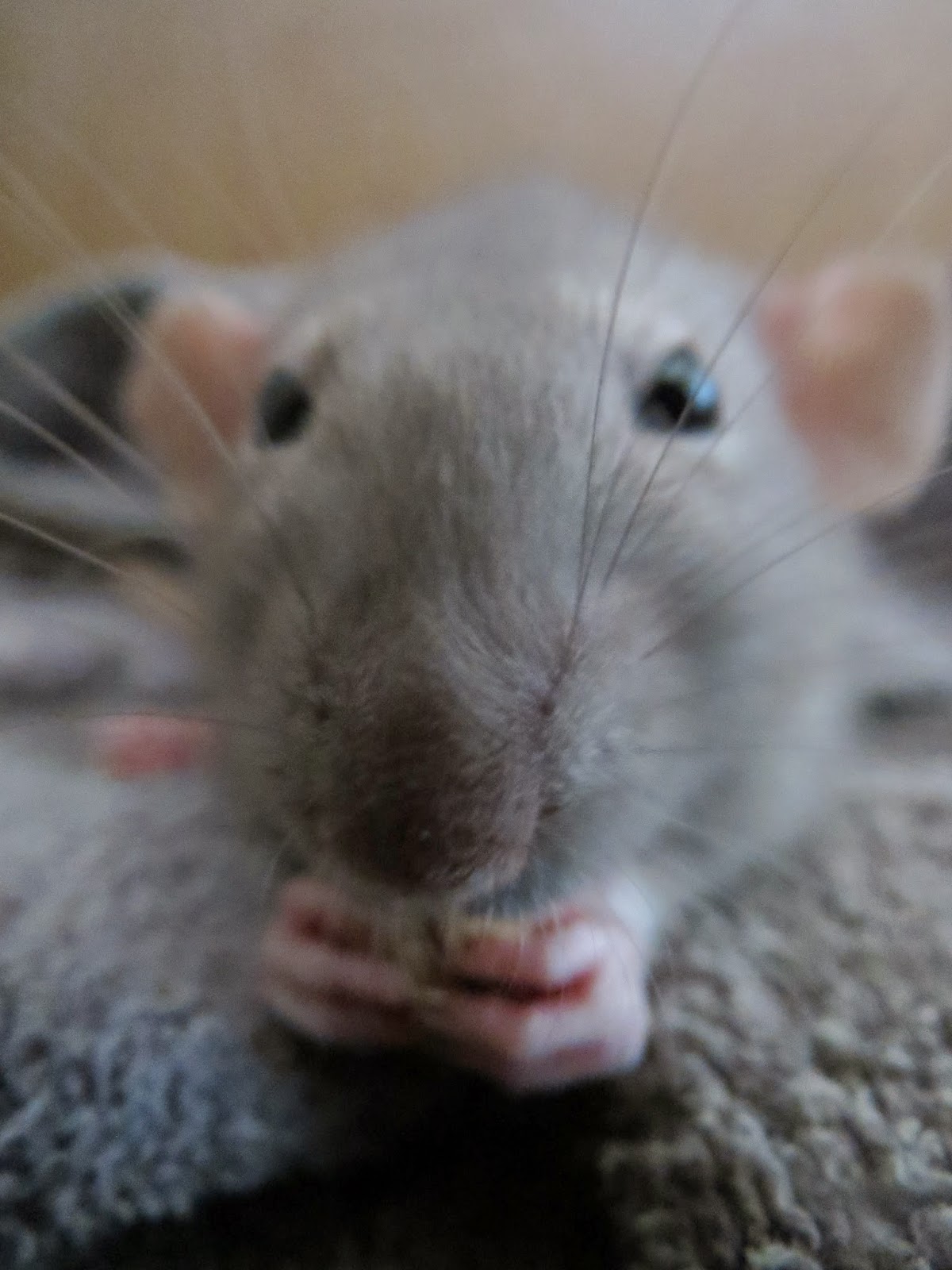 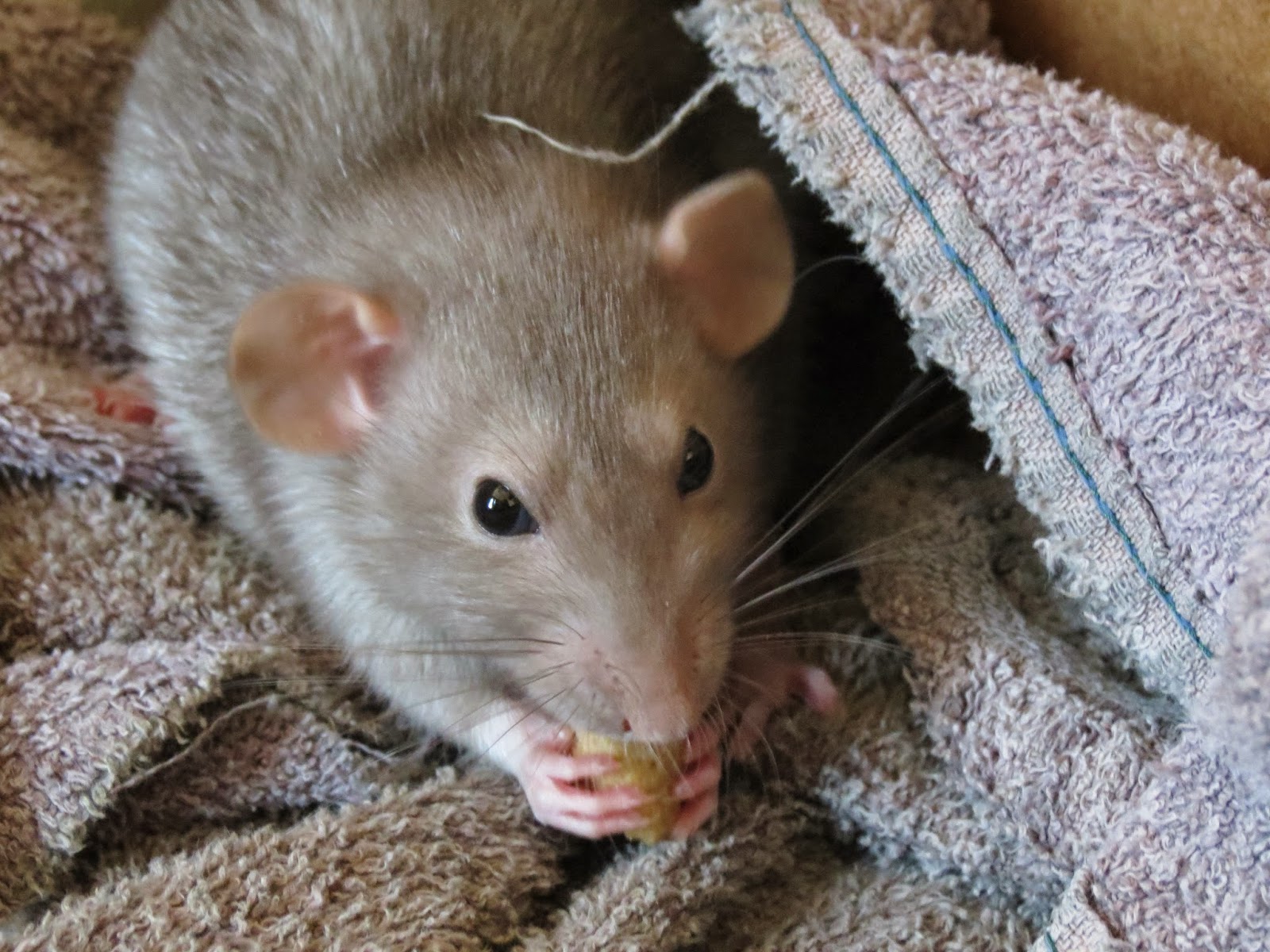 I had been asking for a rat for years.
Before Christmas I found a cute picture of a rat on Google, printed it off and taped it to the wall above a remote control helicopter that my dad wanted.
It was not long before he taped his picture over mine.
I then taped mine over his.
This continued until Christmas when my dad got his helicopter.
Finally, he said that I could get a rat, but only if I could fine one who looked just like the picture. 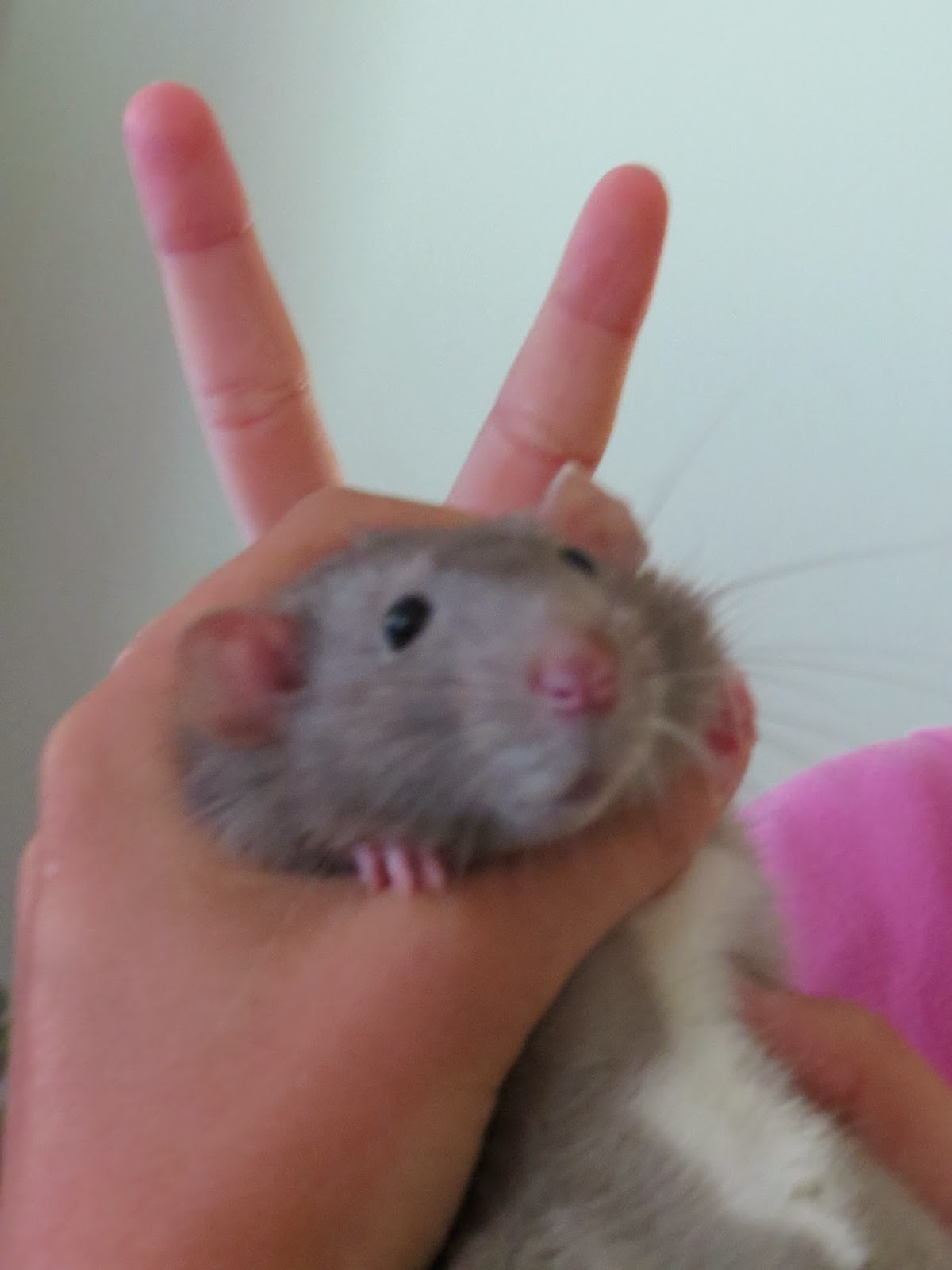 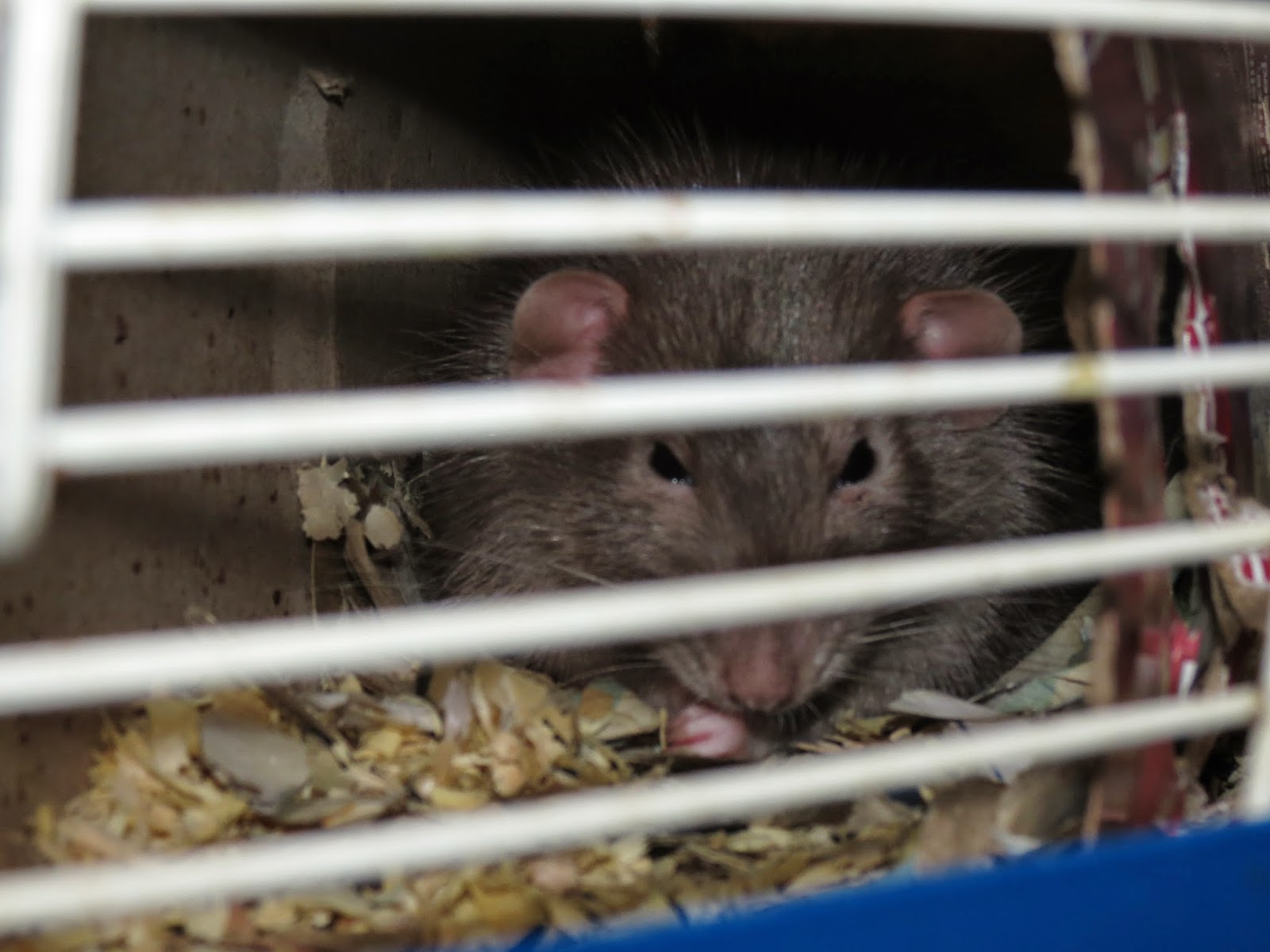 The next time we went to Petsmart, which was on 1-28-14, I found Remy.
He was sleeping when I first saw him and closely resembled the picture.
He cost $12.03 - not including the cage, food, shavings, water bottle, etc. - but he has been worth every cent. 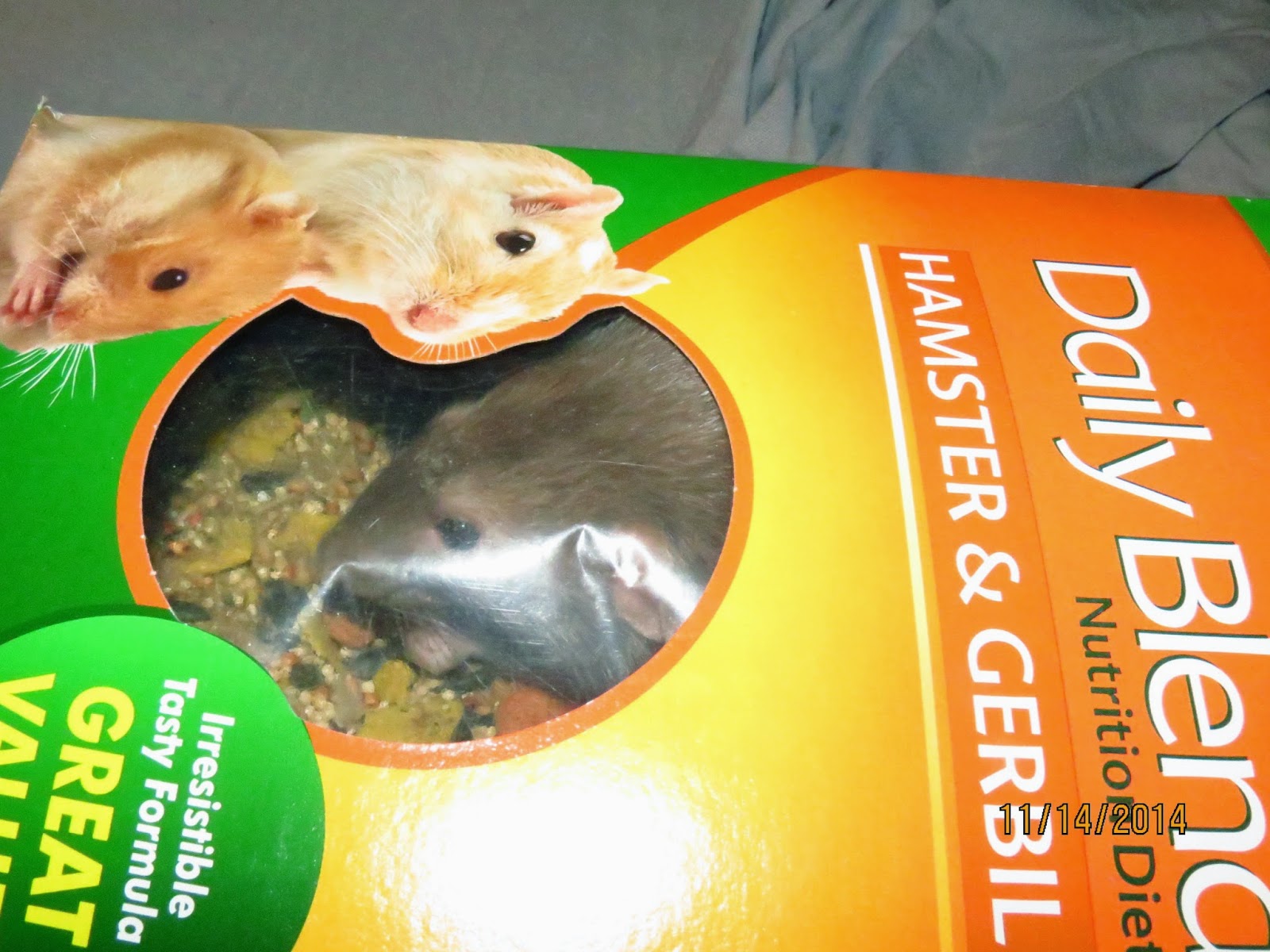 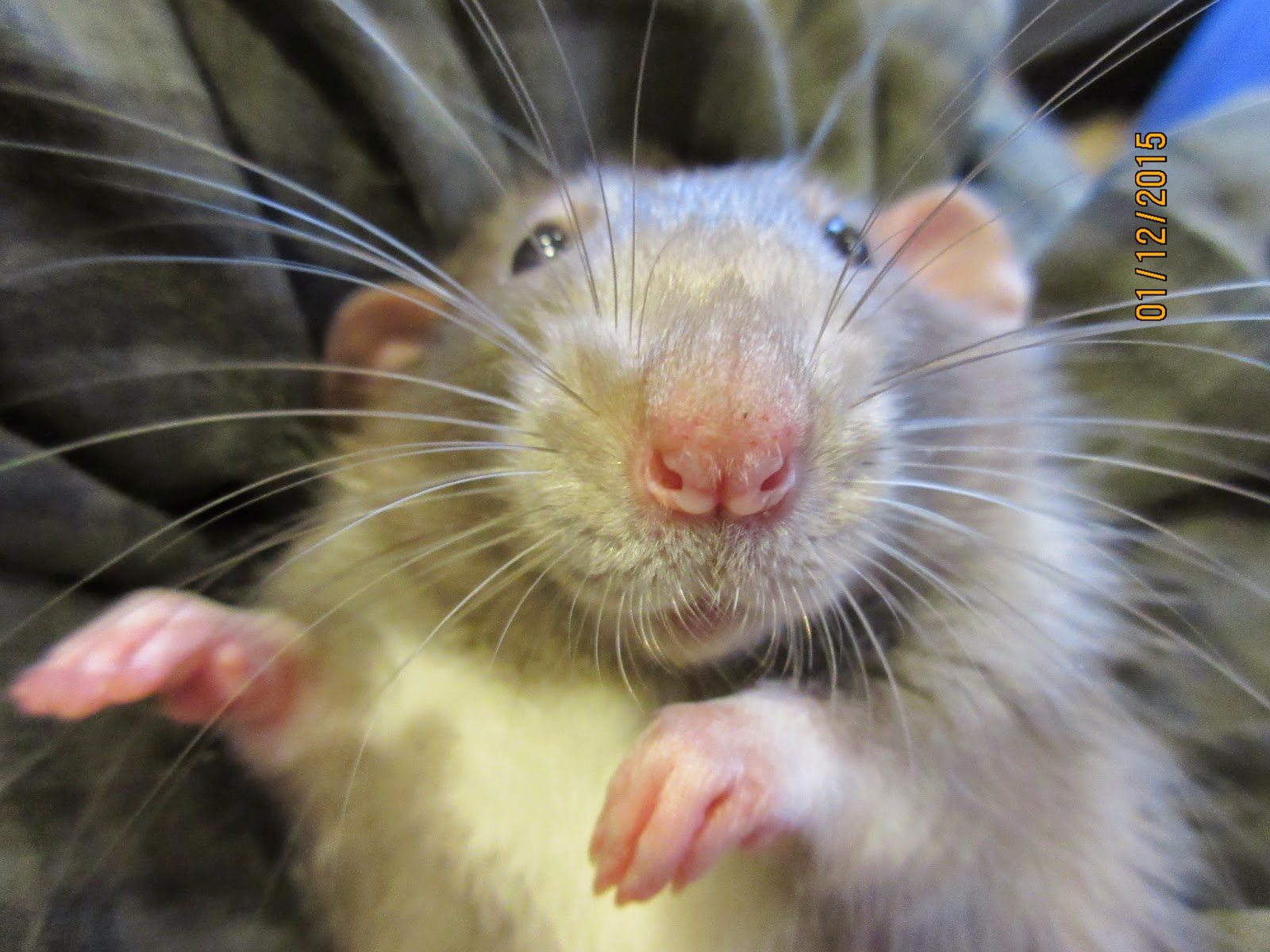 He has an upper respiratory infection, and although he was given several different medications and herbs, he has not been cured.
He has had two lumps.
The first was found under his neck not long after we brought him home. It was small and slowly went away.
The other one was on his belly. I noticed it sometime in December of 2014. It grew fast, and was soon around the size of a quarter. I was beginning to get very worries. On January 11, I found a small scab and realized that it was an abscess.  As he was happily munching away on a piece of vegetarian dog food, I cleaned it out. He was very calm, although I could tell that it hurt.
He healed up quickly. 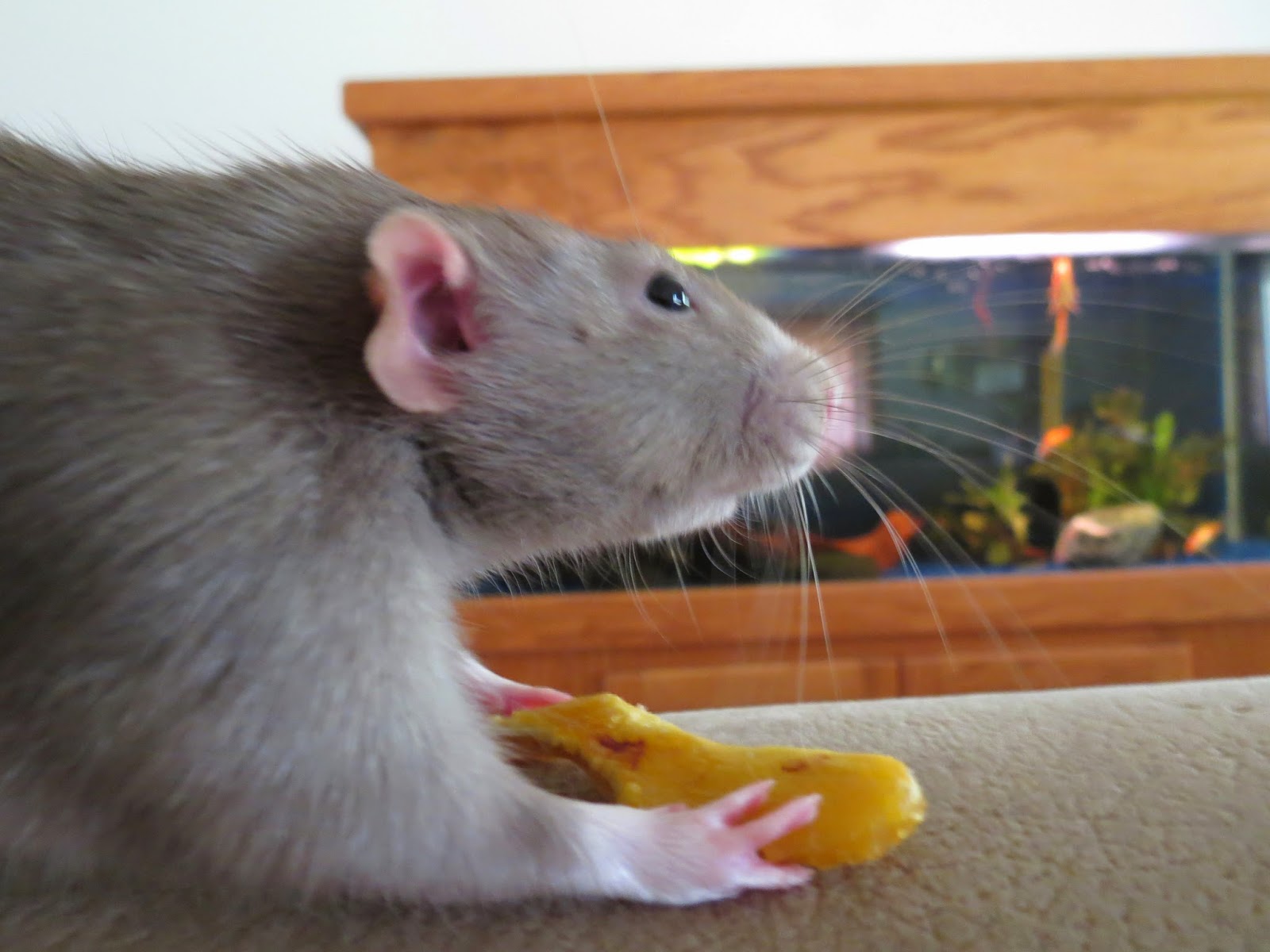 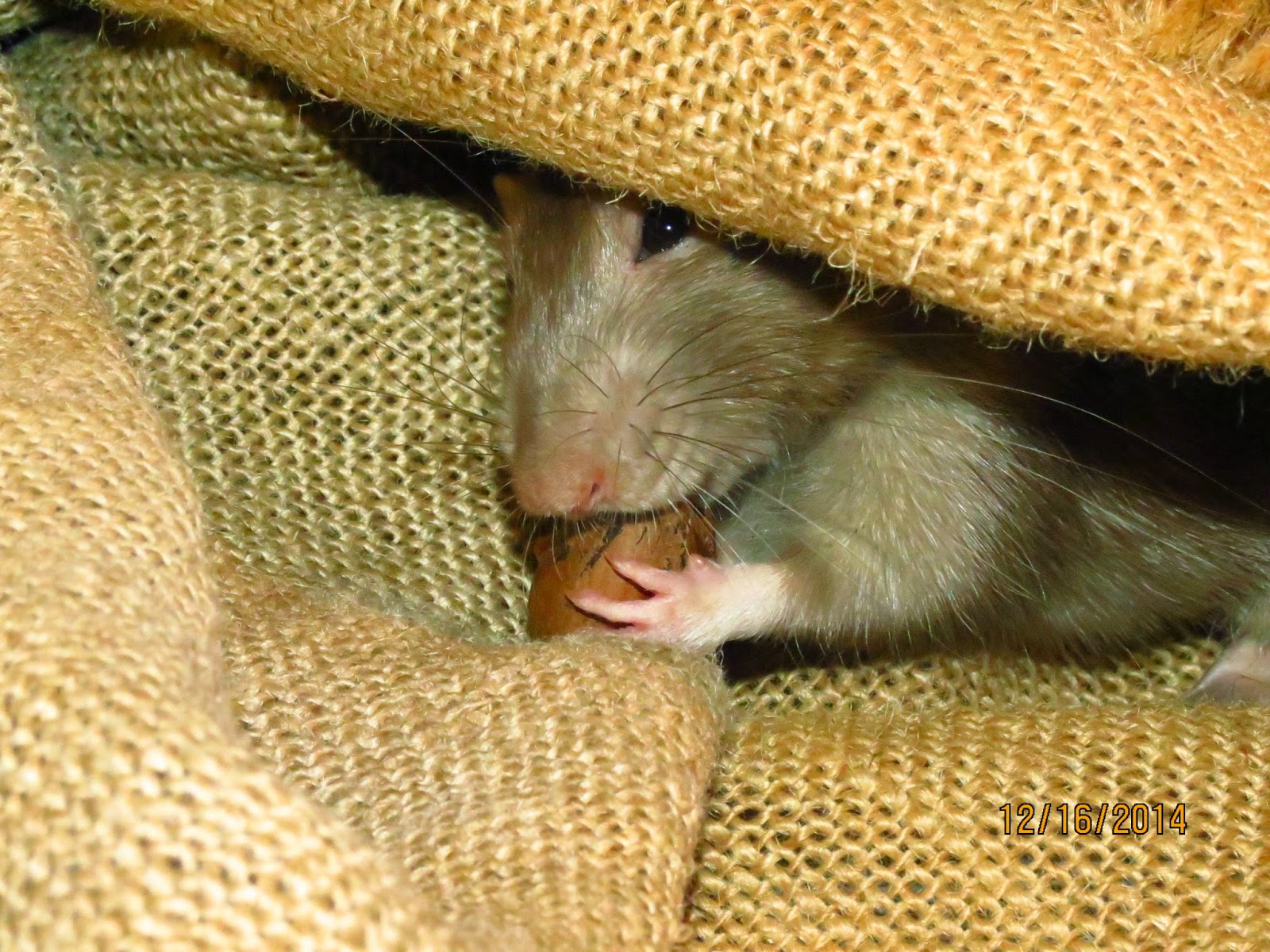 Remy - also called Mousey - loves to explore.
Whenever he is let loose he scurries around with his nose twitching.
He does not try to get away and it is not long before he comes bouncing back.
He loves noodles and potatoes, but will eat almost anything. I fed him mostly organic food, including what we eat, and lots of fresh vegetables.
He is never fed any animal products except honey.
Although at first glance his eyes appear black, they are actually brown and have tiny pupils.
He spends a lot of time grooming himself and is given baths when needed, so "dirty rat" does not apply to him.
No matter what he is doing, he always comes when I click my tongue. He is very intelligent and affection, and loves to play with and groom people he knows. 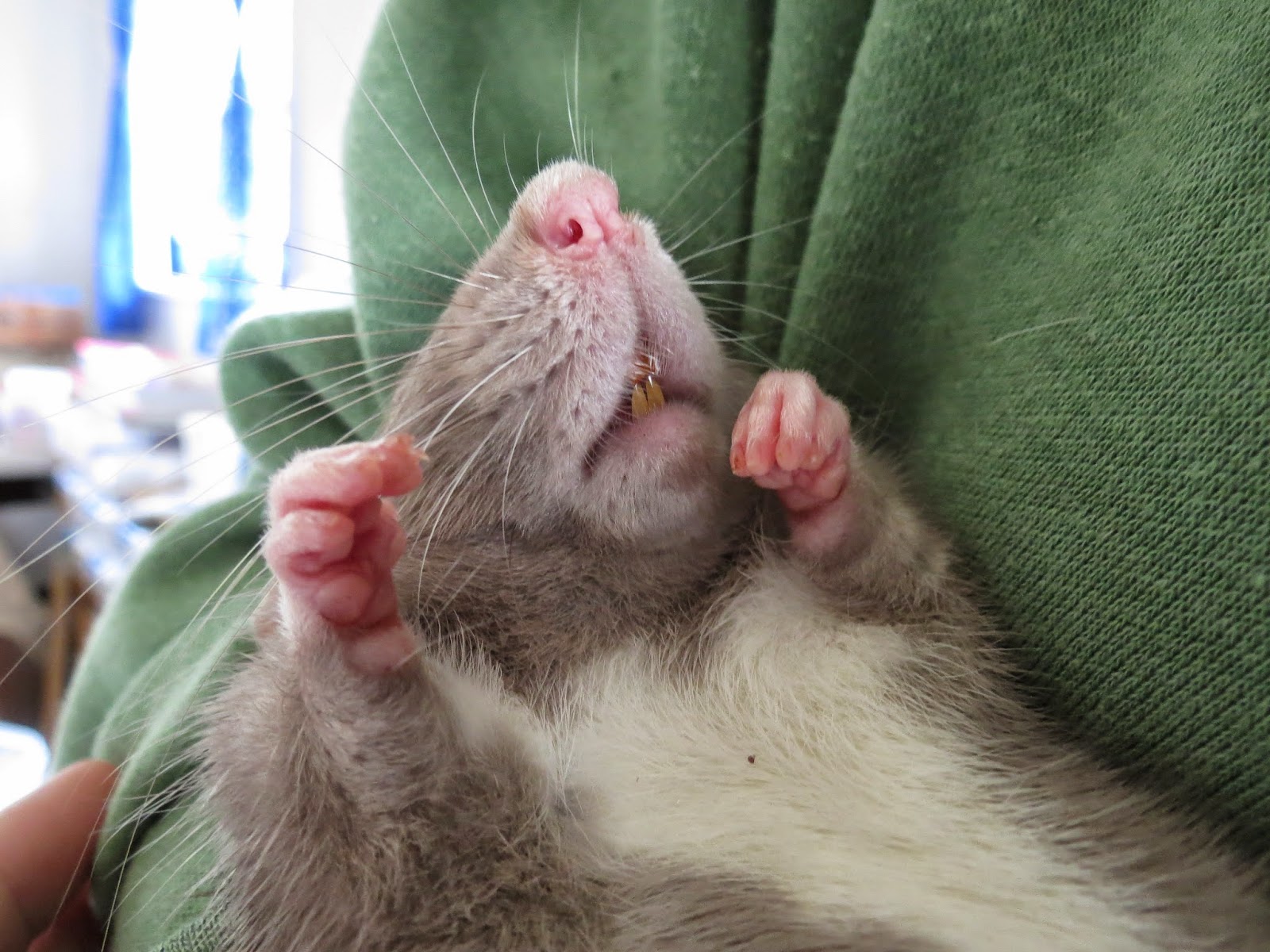 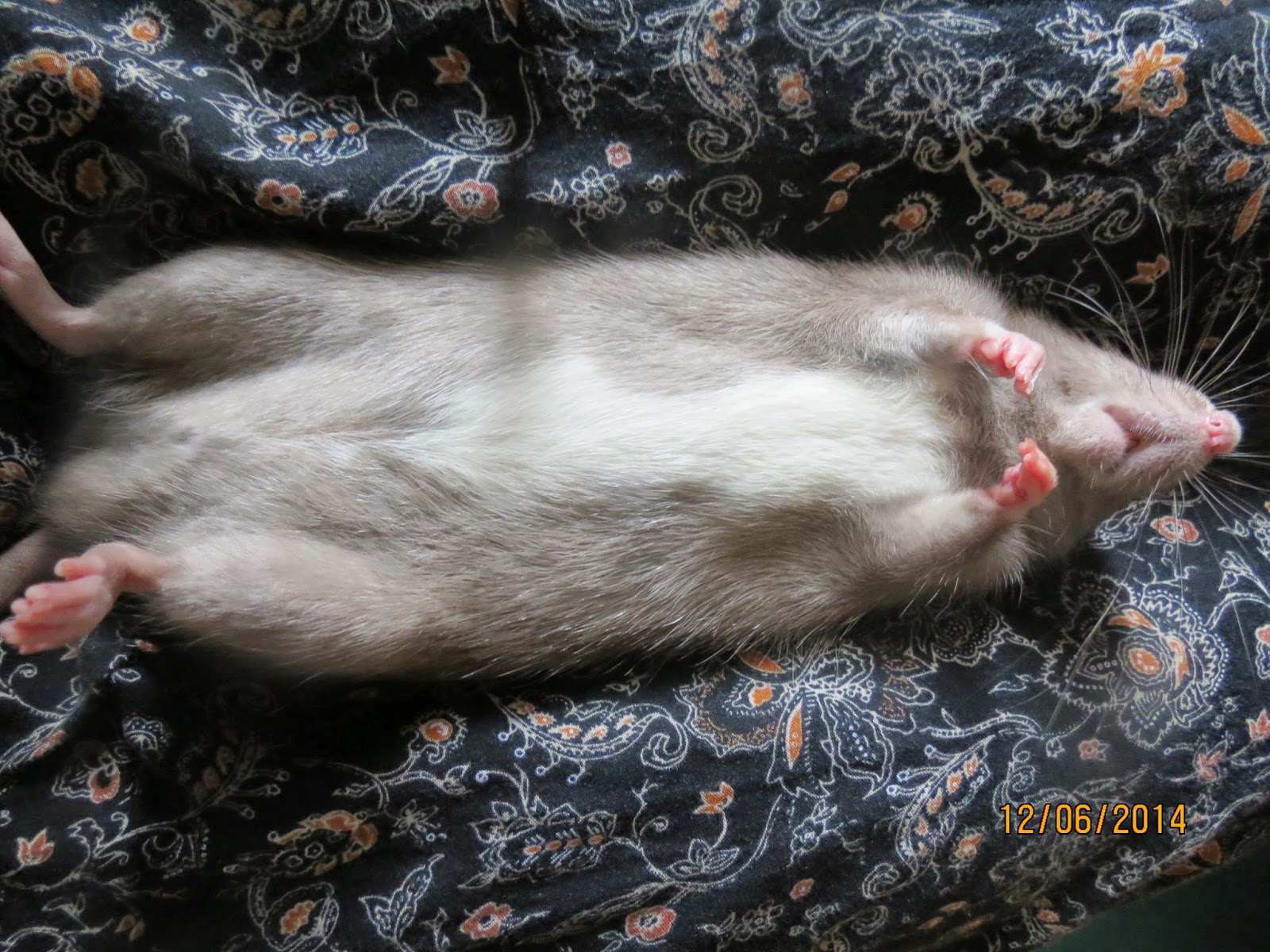 He sleeps a good portion of the day buried under the blankets, laying on top of a cold book, on his back in my arms, etc.
Even when he is afraid, he never bites anyone. As  long as his cage gets cleaned once a week, it does not stink.
He was named after Gambit from the Marvel movies and comics, and also the rat from Ratatouille. 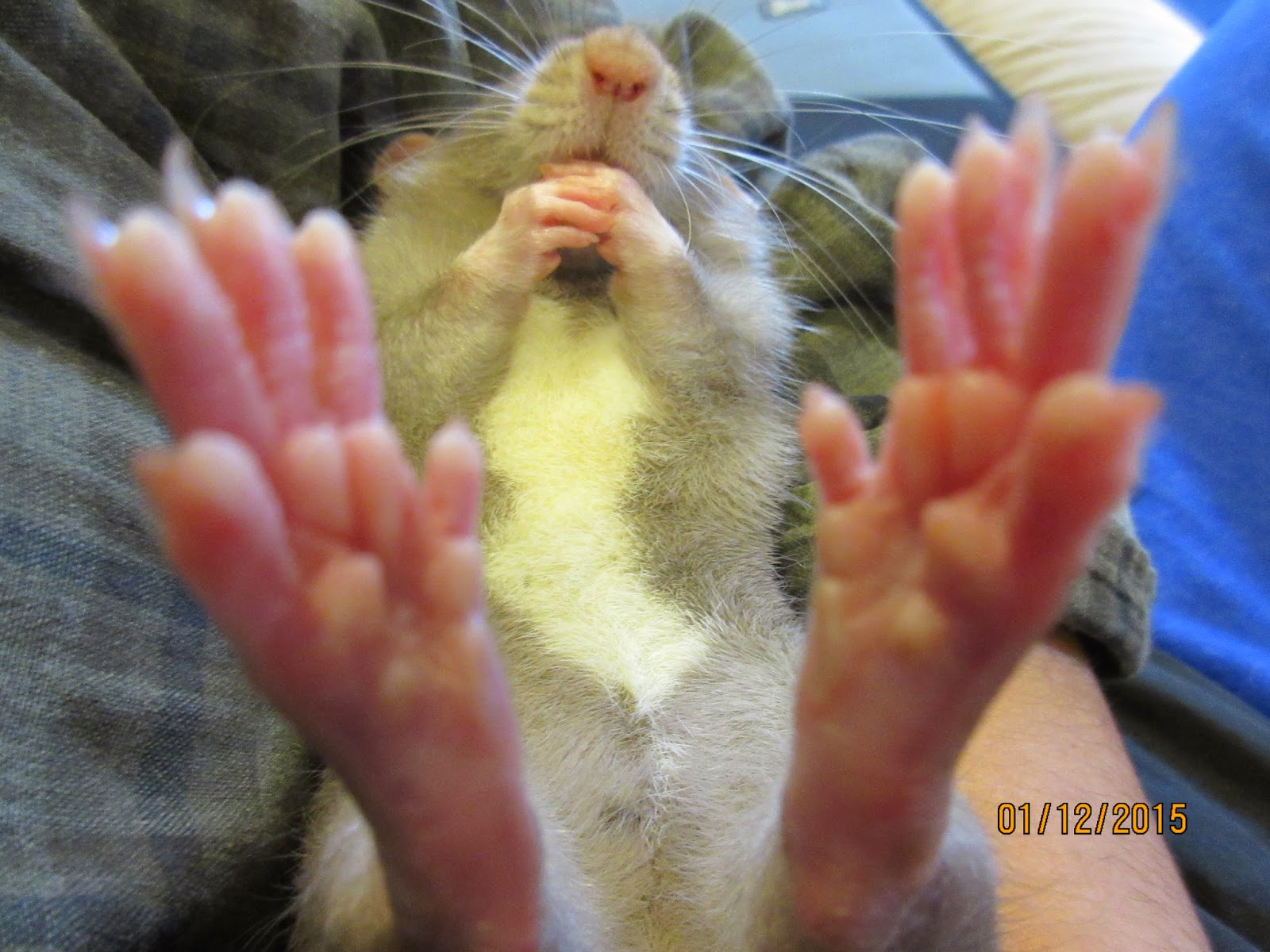 There is really no reason not to like rats.
Maybe not all rats are as cute or intelligent as Remy, but I am willing to bet that most of them are. Regardless of what humans think of them, they are one of God's creatures and should be treated with love and respect.

Here is a video of him.